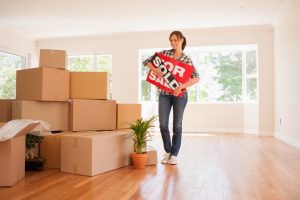 The National Association of Realtors® 2017 Profile of Home Buyers and Sellers, which also identified numerous current consumer and housing trends, including: mounting student debt balances and smaller down payments; increases in single female and trade-up buyers; the growing occurrence of buyers paying the list price or higher; and the fact that nearly all respondents use a real estate agent to buy or sell a home, which kept for-sale-by-owner transactions at an all-time low of 8 percent for the third straight year.  Here are some key highlights from the report:
Single females make up larger share of sales:
Solid job prospects, higher incomes and improving credit conditions translated to continued momentum in the growing share of single female buyers. At 18 percent (matches highest since 2011), single women were the second most common household buyer type behind married couples (65 percent). Furthermore, single women purchased slightly more expensive homes than single men despite earning less. The overall share of single male buyers (7 percent) remained below unmarried couples (8 percent) for the second straight year.
Age of first-timers stays flat; climbs to new survey high for repeat buyers:
For the second straight year, the median age of first-time buyers was 32 years old. First-time buyers had a higher household income ($75,000) than a year ago ($72,000) and purchased a slightly smaller home (1,640-square-feet; 1,650-square-feet in 2016) that was more expensive ($190,000; $182,500 in 2016). Fewer first-time buyers purchased a home in an urban area (17 percent; 20 percent in 2016).
The age of repeat buyers increased to an all-time survey high this year (54 years old; 52 years old in 2016) as older households, perhaps with plans to stay in the workforce longer but with an eye towards retirement, felt more comfortable about buying. Overall, repeat buyers had roughly the same household income than last year ($97,500; $98,000 in 2016) and purchased a 2,000-square-foot home (unchanged from last year) costing $266,500 ($250,000 in 2016).
Nearly all buyers choose a single-family home in a suburban location:
A majority of buyers continue to choose a home in a suburb, small town or rural area (85 percent) as opposed to an urban one (13 percent; 14 percent in 2016). Eighty-three percent of buyers purchased a detached single-family home, which for the third straight year remains the highest share since 2004 (87 percent). Purchases of multi-family homes, including townhouses and condos, were at 11 percent.
Supply scarcity leads to increase in buyers paying list price or higher:
Underscoring the supply and demand imbalances prevalent in many parts of the country, 42 percent of buyers paid the list price or higher for their home, which is up from a year ago (40 percent) and a new survey high since tracking began in 2007. Buyers in the West were the most likely (51 percent) to pay at or above list price.
What Happened to Rates Last Week?

Mortgage backed securities (FNMA 3.50 MBS) lost -1 basis points (BPS) from last Friday’s close which caused fixed mortgage rates to move sideways for the week, but rates were pressured higher for most of the week.

Overview:  Everything domestically pressured MBS to move lower (mortgage rates moved higher) with very strong economic data (Durable Goods and GDP) as well as the House passage of the Senate’s budget which clears the way for Tax Reform to begin.  This all caused mortgage rates to move higher all week until Friday.  That’s when Catalonia voted for independence from Spain and global money poured into long bonds seeking safety ahead of any instability to the Eurozone and caused MBS to rebound off their worst levels of the month.

Gross Domestic Product:  We got the first look at the 3rd QTR GDP and it was much hotter than expected, hitting 3.0% vs est of 2.5%.  Just 2 months ago, projections were for this reading to hit only 1.0%.  This marks the second straight quarter of 3.0% or above growth.  And that is even with the Hurricanes! The Price Index was also higher than expected (2.1% vs est of 1.8%) which is inflationary.

Consumer Sentiment:  The final reading for the University of Michigan’s Consumer Sentiment Index was revised from the early release of 101.1 to 100.7.  This is a huge increase over September’s 95.3 reading and is very positive for the economy.

Geo-Political:  The House voted 216 to 212 to adopt the Senate’s FY 2018 Budget.  That now lays the ground work for Tax Reform as a simple majority is all that is needed to pass.  The President and Treasury Secretary have said that they will submit their Tax Reform Bill on November 1….and then the fireworks start.

Geo-Political:  The Catalan “government” took center stage as Spain has enacted their “Article 155” scenario to squash the Rebels.  Catalonia defied Madrid and voted to pass the motion to establish a new republic independent of Spain with 70 votes (68 were needed for majority).