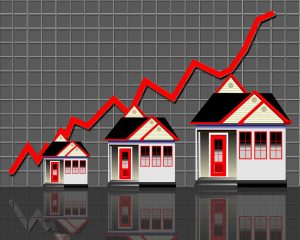 The U.S. Census Bureau reported that October New Housing Starts were stronger than expected 1.29M vs est of 1.19M and September was revised upward. Single Family Housing jumped 5.3% to 877K units. Building Permits also beat out expectations (1.297M vs est of 1.225M) and also saw an upward revision to the prior month.

Meanwhile, the National Home Builders Association reported that their Home Builders’ Confidence shot up to an eight month high, rising 2 points to a reading of 70.   Any reading above 50.0 is positive and readings in the upper 60’s and even low 70’s is considered very robust.

“Demand for housing is increasing at a consistent pace, driven by job and economic growth, rising homeownership rates and limited housing inventory,” said NAHB Chief Economist Robert Dietz. “With these economic fundamentals in place, we should see continued upward movement of the single-family housing market as we close out 2017.”
Of the index’s three components, current sales conditions rose two points to 77. Buyer traffic also increased two points to 50, which is the first time in six months that this component has been in positive territory. Sales expectations over the next six months fell one point to 77.
Sources: U.S. Census Bureau and National Association of Home Builders

Overview:  While the House did pass their version of Tax Reform, the Senate is still a very large uncertainty in the eyes of long-bond traders that are skeptical that they will have the votes to move forward.

Inflation?  The October Headline Consumer Prices Index YOY hit 2.0% vs est of 2.0%.  So, the 2.8% PPI rate did not flow through to consumer prices.  The more closely watched Core CPI YOY came in a tick higher than expected (1.8% vs est of 1.7%) but still remains below the 2.0% threshold.

The Atlanta Fed Business Inflation Survey increased from 1.8% in October to 2.0% in November which is the highest reading since June.