Bad Neighbors Can Cost You, Research Before You Buy: 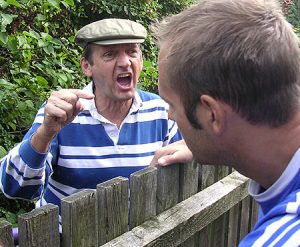 Buying a home is one of the biggest investment any person will make in their lifetime. But how often do potential buyers do as much due diligence on their next door neighbors as they do with, say, the décor in the bathroom or square footage in the yard?
Some 25% of home buyers said they regret not asking about their neighbors, while 30% said they wish they’d looked into the local sex offender database, according to a survey of 2,000 homeowners by mortgage-information site HSH.com.
Only 16% regretted that their home was too small. But roughly 40% of people said they’ve argued with their neighbor over noise, parking, kids, pets, danger to property and other landscaping issues, according to a separate survey of 3,000 people by real-estate site Homes.com released last year.
An annual online poll has ranked noise as No. 1 year after year. That includes barking dogs, loud music, car and house alarms and domestic arguments.
Barry Covert, a lawyer based in Buffalo, N.Y., recommends people research potential neighbors’ Facebook accounts, talk to local police, visit corner stores and local laundry services, and knock on the neighbor’s front door and find out for yourself. These steps make financial sense. And check online sex offender registries too: One study by Longwood College and Longwood University in Virginia said that registered sex offenders living nearby can reduce a home’s value by 9%, and homes near registered sex offenders can take 70% longer to sell.
Make sure the property line in the deeds of your future home matches with the actual property line, said Robert W. Zierman, a lawyer in Seattle. Few homeowners have heard of “adverse possession,” but it is the legal grounds on which a neighbor can claim “continuous, exclusive, open and notorious” use of your land if he or she has done so for a period of time. If there has been unlawful use of land for many years, the neighbor may be able to claim ownership in some states. Ask the seller for a written disclosure of all issues presented by neighbors over the years, Borzotta said
And the problem isn’t always next door. “We who consider ourselves good neighbors need to realize we’re not perfect,” he said, “and that introspection, maturity and dignity are the best ways with which to handle neighbor conflicts as they arise.”
Source: Neighbors From Heck Online

Overview:  We had a very light week for economic data as there was not a single economic release that had the gravitas to move the needle on rates.  We also had a shortened trading session with the bond markets closed on Friday in observance of Veteran’s Day.
The bond market focused on two key areas:  The Fed and Tax Reform.  Both gave the bond market more uncertainty.

The Talking Fed: N.Y. Fed President and FOMC Board Member William Dudley announced that he will be retiring a couple of  months early.  The term limits are for 10 years and he was slated to hit that in early 2019.  He said he would retire in “mid-2018” instead and that the exact timing will be determined by making sure that his replacement is all set before he leaves office.
Tax Reform:  The Senate Finance Committee Chair Orrin Hatch released the Senate’s updated Tax proposal.  It had several key differences from the House Bill.
Here are the most notable highlights:
20% permanent corporate tax cut delayed by 1 year
Complies with the $1.5 trillion cost (will cost $1.44 trillion)
Preserves 7 tax brackets: top tax bracket is 38.5%, down from 39.6%
Doubles standard deduction from $12,700 to $24,000 (married couples)
Ends state and local tax (SALT) deduction; keeps business deduction
Keeps the mortgage Interest deduction cap at $1 million
Preserve the estate tax, doubling the current $5.49 million exemption for individuals
Raises the child tax credit to $1,650 from $1,000
Sets 10% tax rate for US companies with IP in foreign low-tax jurisdictions
Full expensing of capital investments for five years
Preserves 401(k)s IRAs,
Sets repatriation rate at 12% for liquid assets, 5% for illiquid assets
Carried interest loophole unchanged
Electric Vehicle tax credit is spared